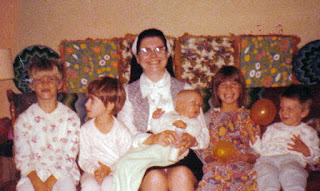 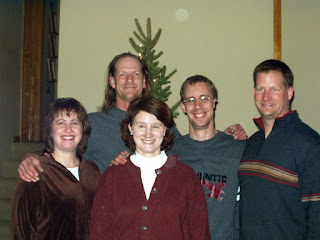 loved the pictures...makes you seem more real...than just words on a blogging screen.

Our's our special needs kids too, however we always see their abilities rather than their disabilities. I love the pictures. Thanks so much for sharing such a precious family.

I enjoyed your 5 things post, and I love that picture of the little girl too!
your kids looked adorable then and very beautiful and happy now. Lucky you!

What a beautiful family you have!

What a wonderful family! Love seeing the then and now photos together.

I love then and now pictures! I also was born in MI in 1969, it was a different place back then.
Thanks for posting these wonderful pictures!
Cheers,
Dionne

How wonderful of you and your hubby to have adopted 5 children Finn! Very lucky children to have found their way into your hearts, and I'm sure visa versa... 8-)
Hope you are happy stitching! 8-)

Wonderful photos. Lucky you, lucky them.

Great to see everyone in the old photos.

how very special to have a current photo of all your "kids" together like that! the years fly by

Hi Finn and Ebby. Yes, I'm still around, alive and kicking, and just wanted to pop in to 'see' you since I've been on the computer so very little the last few months, and NO quilting at all. :( But I miss you and Ebby, and just wanted to let you know that. I hope both of you are well, and are staying warm. :) I knew from the moment I first started emailing with you that you had a HUGE heart with so much love to give...and I was so right!! :D Your kids are beautiful. (BTW, I love your new header photo)

Beautiful family. I was adopted also, late 50s for me. My mom always told me adopted kids were special because the parents got to pick the ones they wanted... not just get the ones that were born to them. :^)

I love your pictures! A glimpse into your life. I am glad you have made such a wonderful difference in those kiddo's lives! 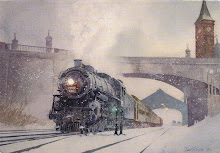